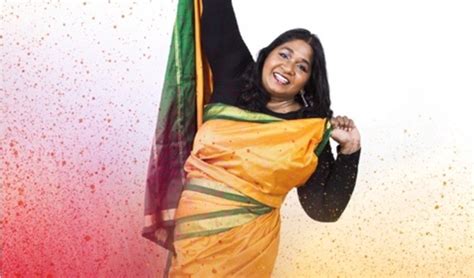 Rani Moorthy is Sri Lankan Tamil, grew up in Malaysia, was educated in Singapore and came to live in the UK in 1996. The unique alchemy of being an outsider and a migrant set her up for the artistic life as writer and performer deeply invested in what is shared rather than what makes us different.

Rani has appeared in Coronation Street, A&E, Cold Feet, Moving On, Prisoner’s Wives and plays Mrs.Bilal in the BBC1 sit-com Citizen Khan. Film work includes Twenty8K, Throw of a Dice and All in Good Time by Ayub Khan Din based on his Olivier winning play Rafta Rafta.
Rani has written for BBC1’s Doctors and is a regular contributor and presenter on BBC1’s The Heaven and Earth Show and BBC Radio 2’s Pause for Thought. Adapted her own play Curry Tales for Radio 4. She has written the Woman’s Hour drama Whose Sari Now for BBC Radio 4. Rani was specially commissioned by Shobana Jeyasingh Dance Company to write text for the contemporary dance work Just Add Water? (Royal Opera House 2009 and on tour in 2010).

As a filmmaker, Rani’s short film Incense funded by the Film Council “New Cinema” fund, has been shown in major national short film festivals and in Berlin, Cannes and New York.